“That is, every time the incrustations of an overly established Christianity have been broken open, the faith has spread—and been spread—dramatically into new geographic and demographic areas, thereby increasing exponentially the range and depth of Christianity’s reach as a result of its time of unease and distress.” Phyllis Tickle, The Great Emergence 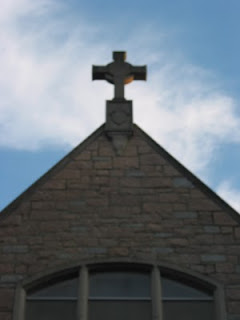 Five or six months ago, depending on which projection you read, the world changed and initially no one noticed. That is the way major change occurs, isn’t it? It starts as a ripple on the surface that eventually erupts into a tsunami. Somewhere someone got sick. Then their family got sick. Some of them had minor symptoms, others got so sick that they died. They went into a city to seek medical care, and as is often the case in large hospitals, crowded with immunocompromised people, this new virus began to spread. The ripples were becoming waves, precautions were taken, though too late to contain the spread. Now the world is different than it was. The tsunami is crashing the shores. Theatres, churches, and stadiums are empty, and home is the locus of our day to day lives for the first time in decades. The world changed, it has thrown our lives into chaos, the systems we depend upon are in crisis, however this is an opportunity for it to be a catalyst for those of us who call ourselves Christians. We have the opportunity to lean into the difficulty and practice our faith in ways that bring hope into a world that is clamoring toward despair.

Chaos, complete disorder and confusion, is what life feels like. The internet is filled with people lamenting about not knowing what day it is, how disoriented they are, and, of course, how much they miss their hairdresser. Can we have a moment of truth telling? For some time, we have known that Christianity, especially how it has been practiced in the West, has been in chaos for some time. Some of us have even lamented that the way we do “church” is broken. Sure, your church might be “thriving” however I would speculate that in your city there are fewer people who practice Christianity than there were a decade or two ago. Even “successful churches” are really those that are best at simply gathering discouraged Christians from other congregations because you provide a better band or cooler youth group. The chaos has been building, yet we have been denying it because of a few flagship congregations who seem to be growing when they are just gathering sheep from other flocks. Now that there is no way for them to provide the emotionally-charged, experience-driven weekly event, there is chaos.

It is not just large churches in chaos, small churches that were barely hanging on before, are also in chaos. These churches didn’t have robust online giving portals or flashy tech staff to be able to attempt to translate their experiences into a full-blown media event. They have part time pastors with iPhones trying to Facebook Live their messages and maintain contact with a scattered congregation. These churches relied on close, intimate contact, pastoral visits, and extended family relationships that have been thrown into chaos by having to physically distance themselves from each other. With offerings not taken and funds drying up, these churches will soon be facing difficult decisions.

Not only are our lives in chaos, the systems we have come to depend upon are in crisis. I never imagined the U.S. would face a ventilator shortage or the possibility that there wouldn’t be enough hospital capacity. I also never imagined people would be protesting in the streets to be allowed to go to the hairdresser or shop at Bass Pro Shop. Governmental systems are giving radically mixed signals and nobody really seems to be in charge. After years of vicious partisan division, when a catastrophe has come knocking at the world’s door, the house is too divided to stand. In all of this, I am still an optimist. People are resilient. Despite some of the failings of the larger systems, it is encouraging that at a local level small victories are being won. Communities are organizing to feed their neighbors, provide for the elderly and at risk populations, and support essential workers. Crisis continues to shake our confidence but if history teaches the people of faith anything, it teaches that crisis and chaos are the foundation for catalytic change. It us during these times of radical change where the message of hope that Christianity can bring to the world can be heard as a clarion call.

Your church will be completely different after this There will be no “going back to the way things were.” The gathering of God’s people in community will look more like Acts 2. The post-Constintinian, experience-driven, large gatherings we have become accustomed to may be suspended indefinitely or at least scaled back. If we take medical experts seriously it may yet be months before dozens, hundreds, or thousands can gather again in what we have come to understand as “church.” There are two ways to look at this. The first way is to see it as though it is the large group in the big, fancy building or twenty to fifty saints in a rural white chapel that is the “church.” Even a cursory reading of the New Testament will clarify that this was never what the First Century Christians considered the “ecclesia.”

The second way, that I hope to unpack and help you strategize and create space for over the next few weeks, is the smaller gatherings that will allow the people of God to experience the power of the Holy Spirit in intimate settings within their homes. It is certain that before we are encouraged to gather in large groups again, we will be allowed to gather in groups of ten to twelve (that number sounds familiar). Here is where the true “ecclesia” happens. The Church grew fastest during the years 70-325 AD. This is because the gatherings were based in homes where real relationship happen. While large groups are exciting, smaller gatherings allow for deeper faith exploration. In our highly cynical world we are naturally suspicious of faith leaders who remain distant and removed this is a chance to be truly known.  Intimacy provides for transparency.

Currently the doors to the building where you gathered are closed, however the hearts of people all around us are open to the Word of hope that comes from a relationship with the risen Christ. Instead of seeing the loss of a building as causing chaos and a crisis to overcome, perhaps it is time we realize that is just this type of catalyst the Church needs to break free of its stagnant and broken structures and rediscover itself in the words of Acts 2: 42-47:

“The believers devoted themselves to the apostles’ teaching, to the
community, to their shared meals, and to their prayers. A sense of awe
came over everyone. God performed many wonders and signs through the
apostles. 44 All the believers were united and shared everything. They
would sell pieces of property and possessions and distribute the proceeds
to everyone who needed them. 46 Every day, they met together in the
temple and ate in their homes. They shared food with gladness and simplicity.
They praised God and demonstrated God’s goodness to everyone. The
Lord added daily to the community those who were being saved.”

My prayer is that we return to a time where the Lord adds daily to the community. Then we will truly be the Church. I remain:

Consumed by the Call
Marty